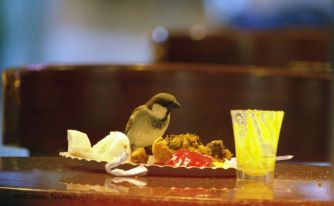 The city of Bangalore is special and the love its citizens have for sparrows is well known.

The Bangalore International airport is one of the most exiting place to watch sparrows. On many occasions when I am traveling out of Bangalore I have made sure I reach the airport at least few hours early to watch the sparrows.

Last time when I was moving around with my binocular and camera people were finding it weird that what I was looking around in the airport building many also stopped and were pleasantly surprised to see sparrows.

To keep out of trouble I took a permission from the CISF head of the airport to photograph and use the binoculars in airport premises keeping in mind the security concerns.

I undertook a small survey of the airport to understand the presence of sparrows there. The steel structure of the airports is made in such a way that the it offers the sparrows nesting place.

The grasslands on the opposite side of the airport may be taking care of the insect food that the sparrows may need to feed its young ones. Apart from this the constant supply of food from the eateries offer an important source of food.

The Sparrows of Bangalore airport are in fact 5 star sparrows they are offered security by CISF, get to live in Air conditioned environment, have never ending supply of 5 star food being served round the clock. I have observed sparrows actively feeding at 4.30 AM once at the airport. 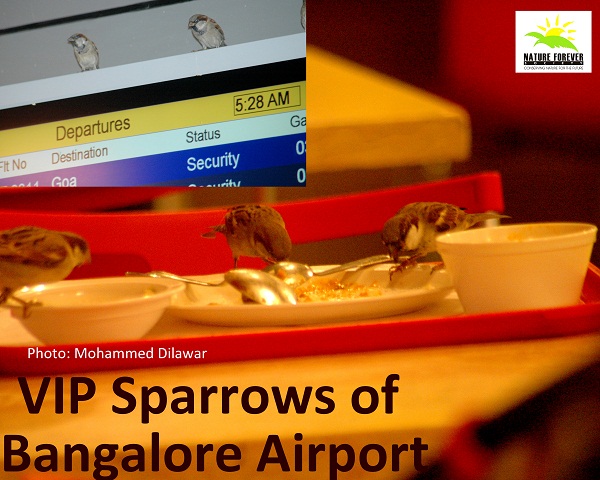 While most of the people enjoy the presence of sparrows at the airport some passengers and the shop-keepers who sale costly clothes, and other wares have raised an objection to there presence in the airport.

The airport management may consider some measures to control the sparrows in the airport. But the population of house sparrows at Bangalore airport is one of the best in the city of Bangalore.

Next time you are flying out of Bangalore make sure you reach the airport few hours early, carry your binoculars, a pen, you can have some snacks with none other that Mr. and Mrs Sparrow at the numerous restaurants at Bangalore airport. But put an alarm and make sure your security check is over as I was about to miss my flight on one occasion.

Missing the sparrows in Bangalore

Sparrows in my Home